Typically, electric vehicle drivers try to do something good for the environment and to pollute the atmosphere as little as possible. Even though electric cars tend to produce less carbon pollution than gas vehicles, hearing that charging an electric vehicle also pollutes CO2 concerns a lot of potential EV users. But how green are electric cars compared to fuel vehicles?

We can identify two main sources of carbon emissions during the life cycle of an EV:

But how much CO2 is saved by using an EV compared to a fuel consuming vehicle?

The answer to the question, of how much CO2 is emitted, depends on the country you are charging your car in. The CO2 amount depends on the CO2 emitted for the electrical energy, which is charged by the driver. If the driver charges in a country with a high amount of renewable energy like wind, solar or hydro energy (e.g. Norway), his or her charge leads to less CO2 pollution than in a country, which depends to a high percentage on coal plants for example.

The diagram shows an example of the diversification of the energy supply for a country. The grey energy sources (Biomass, Mineral Oil, Natural Gas, Hard Coal, Lignite) are sources, that pollute CO2. The diversification applies for the average kWh over a year. In this example, circa half of the produced energy does not pollute the atmosphere with CO2 (Hydro Power, Wind Off- and Onshore Power and Solar Power). We highlighted Nuclear Power in yellow, because it does not pollute the atmosphere with CO2 but comes with other downsides concerning many EV drivers. 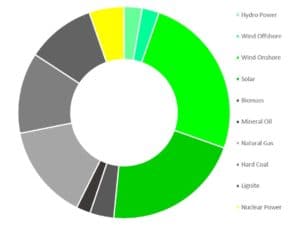 Among the energy sources that pollute CO2, the sources differ in regard to the amount of polluted CO2 per kWh. This is shown by the outer circle in the following diagram. We can see for example, that coal plants pollute more CO2 per kWh than Natural Gas plants. 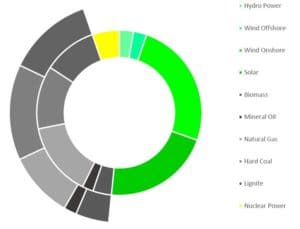 The following table gives the CO2 pollution for each energy source.

In the example we chose for the diagrams, the overall CO2 pollution for the average kWh is 127 gCO2 /kWh.. This average can be taken into account when you want to calculate the amount of gCO2 / km.

Now that we understand which energy sources produce CO2 emissions, we can compare both electric cars and gas-powered vehicles’ carbon footprint.

Carbon footprint of electric cars vs. gas: How much CO2 do I save when driving an EV instead of a fuel vehicle?

To answer the question “How much CO2 is saved by driving an EV”, we can compare this number with the gCO2 / km polluted by a similar fuel-driven car.

To make it easier for you, we have a calculator doing just that for the different countries. And thereby helping you, to get a feeling for the size of your carbon footprint and how it could change when driving an electric vehicle.

Use our carbon footprint calculator to calculate the CO2 consumption for different countries.

An effect we do not consider in our carbon footprint calculator is programmable home charging stations. Charging stations that can be programmed regarding the charging time can impact the electrical grid. By balancing the charging times, many charging stations can be orchestrated in a manner that balances the energy consumption in the electrical grid. At times, in which solar or wind energy is produced and pushed to the grid, the electricity is cheaper and charging stations can be set to charge at this specific time. By doing this, the EVs enable a higher amount of renewable energy in the energy grid. Enabling more renewable energy in the grid EVs leads to a positive effect on the countrywide electricity production, reducing the carbon footprint even more.

CO2 produced during the production of an electric vehicle

The impact of CO2 on the climate

CO2 is a gas that leads to the greenhouse effect. The greenhouse effect describes the sealing of the warmth of the earth and atmosphere by gases and leading to a rising temperature of the climate. Governments around the world are implementing policies in order to switch from polluting energies to renewable energies. Moreover, many of them are already planning to replace completely fuel cars by EVs in the future to reach their CO2 goals. It will take time, but we will probably get there one day.

With our carbon footprint calculator, we focus on the emission of CO2 since it has the highest rate of greenhouse gases. To understand the full impact on the climate, we should also keep in mind that fuel-driven vehicles also emit other gases:

Besides the carbon footprint, the potential effect of EVs on the environment can be seen in big urban areas.

The air quality in huge cities is often miserable due to pollution from vehicles. Fine dust limits are reached regularly in many parts of the world. The fine dust affects the vision and leads to health issues for the population.

Reducing the direct pollution in the city may by EVs lead to a higher living quality in cities.

Electric engines are a lot less noisy than combustion engines, leading not only to a quiet driving experience but also reducing the noise of cars in the streets. EVs have the potential to reduce noise pollution. Another argument, why EVs might increase the living quality in cities.

We hope you find this article helpful. If you have any questions, please don’t hesitate to contact us at contact.homechargingstaions.com.

Scroll back to top
We use cookies to ensure that we give you the best experience on our website. If you continue to use this site we will assume that you are happy with it.OkRead more